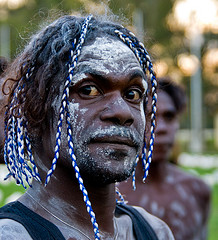 This is what I’ve gotten so far. I should probably not release this as it will change if I ever get back to it. In case I don’t I wanted something to show for the day….

If you’re interested in the true context of this photo then I’d follow the link. I am certain you’ll find it more powerful than what I end up with.

My initial reaction is to write dialogue that includes the spoken word, “Mon.” I’d be half a world off. Which is probably good because it puts me far enough from the reality to be entirely ignorant. And that, of course, is bliss. I’ll endeavor to avoid using ‘Mate’ as well.

“I’m a bartender in places you didn’t even know were places.”

That’s not what I was expecting him to say. I was actually expecting a nod of recognition or even a simple single syllable greeting.

“So. Listen. I could probably take you down in a punch or two or just grab you and throw you to the ground. I’ve had to learn at least how to accomplish that much to get to where I am now. I assure you that you would not get up till I’d left.”

Ok. That’s more hostile than I’d expected too. He’s serious and giving me his CV. Have I done something to this guy? I am starting to feel like I need to give him mine or walk away.