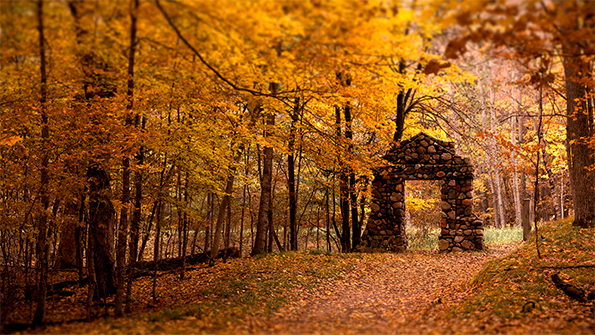 Below the question, a paragraph explains why there are three less than a thousand gates. Apparently prime numbers were important—and known—to the pre-historic people who constructed these unusual rock towers. Below that, a second paragraph outlines a handful of other arguments: poor counting on the part of the builders, untimely conflict with neighboring peoples, lack of both human and material resources, or the ultimate decay of time. Maybe there were once a thousand. Maybe there never were. Or maybe there were never meant to be.

Along the bottom, a line of dots maps out the location of each gate across their two hundred kilometer route. In a wavering course running southwest to northeast with a single bend to the north, the dots trail across the plains over two rivers, a lake and into the mountains. An unknown number of finger touches has ghosted a spot near the beginning of that course.

He hefts a red Osprey Manta daypack from the ground and over his shoulders. Inside, he has three liters of water, a cheap REI rain jacket, a handful of Hammer gels, a Clif bar, a peanut butter and jelly sandwich, and one hundred thousand dollars neatly divided into five Zip-loc bags.

John twists his wrist to check the time. He has less than eight hours to get to gate three-hundred seven or they kill Laurie.