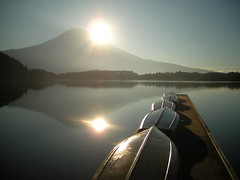 Johnathan pauses, equipment in hand. He wasn’t expecting this.

Without turning his head away from the scene, he sloughs the camera bag off his shoulder. He feels exactly like he is hunting.

In gradual movements he lowers the bag and tripod to the ground. He flicks the camera on with a thought and plans the photograph before making it. The camera informs him that film is loaded and battery power high. It offers to scroll up the lowest speed film he has onboard: 200. Johnathan agrees and queries the lens. It’s not the best either but he tells the camera to stop it down to 22.

He pulls the camera from the canvas bag. Instinctively he hushes the camera just before it cycles up. He likes the stable position he’s in, but wants the dock aligned better. He rolls backward, off his knees. Better.

It’s been a long time since he has made a natural picture. Without a charm to guide him to the moment he just waits.